WE ARE DOING OUR BEST TO FILL ORDERS COMPLETE, BUT THERE IS STILL SUPPLY CHAIN ISSUES AND SOME PARTS MAY NOT BE AVIALABLE WHEN ORDERED. IF EXTENDED LEAD TIMES, THOSE PARTS WILL BE REMOVED FROM ORDERS AND TOTALS ADJUSTED. I AM CURRENTLY NOT BACK ORDERING ANY ITEMS. SORRY FOR THE INCONVENIENCE.

The cart is empty.

These pictures demonstrate the various door handles used on the U. S. manufactured Falcons from 1960 - 1965. The outward appearance of the handles remained the same throughout the production range. The hardware used to activate the locks was changed several times and is the only real difference between the handles. All of the various hardware is interchangeable between the handles with the only difference being the hole used for the locating tab. To replace the handles on the 1960 - 1962 Falcons the 1964 - 1965 handle could be used by drilling a new hole for the locating tab and reusing the old hardware. On the 1963 Falcons, the 1964 - 1965 handles can be used simply by using the old hardware.

We do not have exact start and stop dates for the production of the door handles and are aware that the manufacturer did, at times, go back and use parts that were thought to be discontinued. For these reasons, it is best if you physically inspect your door handles to determine which ones may be on your particular vehicle. 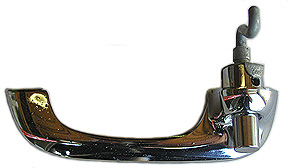 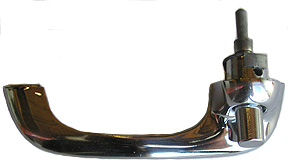 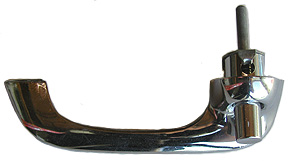 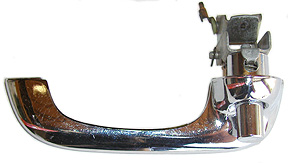 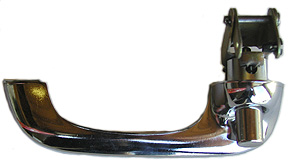